In the last few years there has been a significant interest around SAP’s most progressive product – its in-memory database product SAP HANA. SAP HANA was announced in 2010 and made generally available in 2011. At the beginning SAP embraced the approach of supporting only hardware appliances for SAP HANA. This meant that all main vendors of hardware equipment had to not only certify but build together with SAP dedicated appliances to provide to customers.

During this period appliances were based mainly on Intel architecture with standard configurations to ensure the right performance is achieved from the new system. This is understandable from a company that has tried to push and establish a new product on the market – ensuring performance and reliability are guaranteed especially for the early adopting companies. Every enterprise product bases its vitality on its first implementations and client feedback.

This, however, brought some implications.

First, the appliance model made the system hard to grow. Appliances were preconfigured hardware systems, ideally populated with memory and disks, which would be difficult to upgrade for more heavy usage. Instead in most cases the whole appliances would have to be replaced, causing not only expenditure issues but also requiring complex projects for stopping the system, backing up and restoring data to the new appliance. Given the fact, that SAP HANA would almost certainly host your most critical applications, this could result in a significant implication for the business.

Additionally, appliances necessitate a specific set of knowledge from a group of skilled people, which might be hard to train, maintain and keep. Almost no usage of existing resources was possible.

In 2013, SAP decided to launch an approach that almost entirely changed the way SAP HANA implementations were perceived. The so called TDI approach permitted to customers and partners to not only use appliances as hardware basis for their implementation, but also certified server and storage solutions. Also clients could use existing hardware if it was in the list of certified solutions.

TDI resulted in more options for clients to integrate SAP HANA within the existing environments and to start using internally built knowledge on support of the hardware infrastructure below it.

Around this time IBM began to achieve certification for Power systems culminating in 2015 with IBM and SAP announcing the general availability of SAP HANA on IBM POWER Systems.

PowerVM, IBM’s hypervisor for the Power platform provides excellent results when it comes to virtualizing I/O, CPU, RAM and network. All latest studies show that difference between overhead on standard x86 hypervisors and PowerVM could reach up to 15-20% in favor of IBM’s product.

In a world where bottlenecks start to shift from CPU-disk communication to CPU-memory communication, memory bandwidth is essential. With Power8, servers provide 5 times more memory bandwidth than comparable Intel-based architectures. This will prove even more essential in future, where delta merge processes on SAP HANA become more and more intensive and with techniques like Dynamic Data Tiering that will ensure that only very highly used data remain in memory.

Keeping that in mind, there is no wonder in the fact that IBM POWER 8 is the only platform certified to run 8 simultaneous SAP HANA instances on one physical host (server). Also one of the few to be on general availability for multiple virtualized instances

What does it mean for the clients?

From a technology point of view Power8 should certainly be evaluated and be part of any proof of concept plan. There can also be financial benefits from using IBM Power.

When comparing the memory architectures best practices of Intel and IBM Power differ in one significant point – IBM recommends populating 4 DIMMS per socket, while Intel goes for 8 DIMMs per socket. Both vendors recommend for best performance to utilize same size memory DIMMs.

SAP HANA is licensed per GB memory so the usage of memory should be kept as close to the production needs as possible. Deviations in memory usage of 256 GB might mean thousands in operational costs.

Relying on appliances might be a good thing from the perspective the configuration is approved, certified and pre-configured for use. However, in most cases if you chose an appliance close to your initial needs, it might turn out that you have to buy a new one even if you might need a small to medium upgrade in memory.

Moreover, IBM’s SAP-certified virtualization abilities will allow you to host 8 different SAP HANA instances on a single host thus providing you space for your testing, reporting, pre-production environments. This means more savings from investment in hardware.

Considering these aspects you might find that the initial investment in IBM Power may be a little higher than investing in Intel, however, on the long term savings could come from: 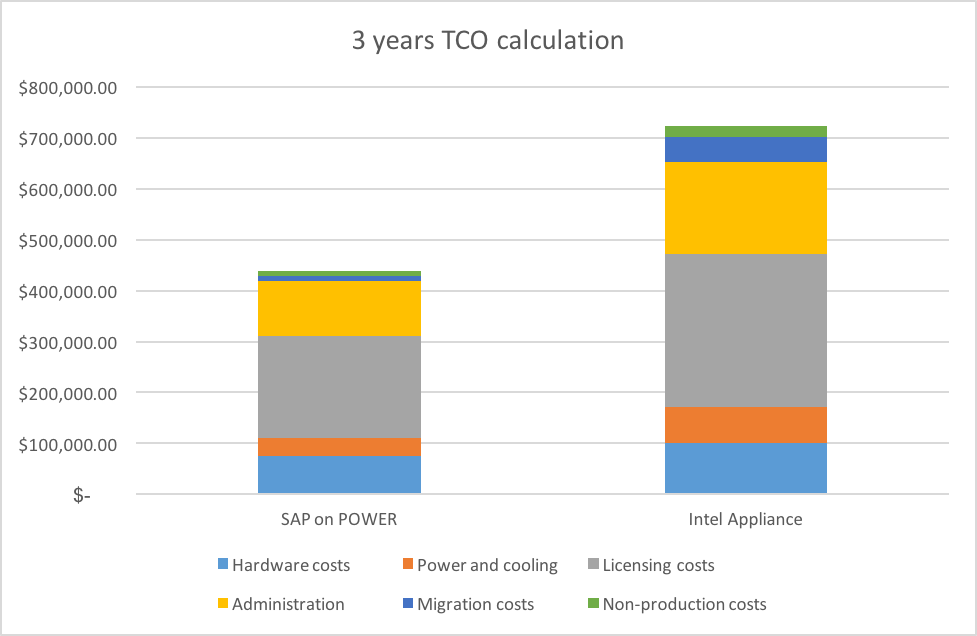 Is cloud a factor?

SAP HANA started almost from the beginning providing services in different cloud platform. With IBM and AWS being the first to launch SAP HANA service on their clouds, so almost all big cloud vendors provided the service to customers.

There are number of niche cloud providers like L3C Limited, which tend to offer reliable cloud service for SAP HANA based on certified equipment that in most cases might even be tailored for your use.

These niche cloud players can easily be utilized to create proof of concept, migrate non-production environments or use as a hybrid approach towards your systems.

Smaller cloud providers will guarantee your data stays in the country and combine the package with a transparent DR solution, which could be easily tested.

SAP HANA deployments will continue to grow and serious consideration should be given to exploring IBM Power as a platform. L3C would be delighted to offer PoC environments to allow you to independently evaluate without undue vendor pressure. See also our discussions on how SUSE has proven to be an ideal Linux platform for SAP HANA.

October 12, 2021 How to actually migrate your AIX data into the Cloud